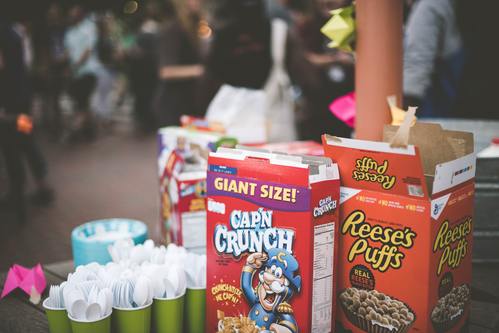 Our theme this week is “replacing our misplaced hopes with hope in Christ.”

Do you know what I think would be a fun job? I think the official title is “person who thinks up the names of generic cereals so as to simultaneously communicate which cereal they are mimicking without risking any sort of unfortunate trademark infringement.”

Let’s look at some examples of what I mean. Enthusiastic types can play along at home to see if you can figure out which famous cereals these are meant to replace:

Cereal purists may contend that one should not substitute the real thing with a knockoff. A large family with a tight budget and kids who can’t discern the difference between a name brand and a generic would beg to differ, especially if they are the sorts of children inclined to gnaw on the box.

Sometimes a substitute is a good thing, but sometimes it’s not.

We would never rebel against the Lord or turn away from Him today by building an altar for burnt offering, grain offering, or sacrifice, other than the altar of the Lord our God, which is in front of His tabernacle. (Joshua 22:29 HCSB)

They would not replace their worship of God with the worship of any cheap substitutes. There are a lot of things today (even some good things) that if we’re not careful, we might accidentally begin to worship without even realizing it.

Let’s commit today to leave such a witness to our descendants too.