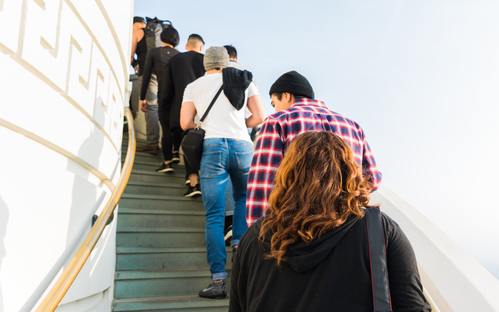 This week’s devotions focus on releasing our misplaced sources of hope.

I used to walk at the mall in the mornings before the stores were open for business. One day as I was walking, I encountered security personnel and armed police officers near a long line of people. Being naturally curious, I asked the officers what the problem was and if it would be safe for me to continue with my walk. They assured me it would be fine for me to continue my walk and explained they were there as security for the store that was getting ready to release the latest Air Jordans.

I believe that if we only had a vision of what God wants for us and has available for us, we would be as excited as those people standing in line waiting to buy expensive shoes. We would be lined up from here to eternity to receive the blessings He has planned for us.

Do you really believe that what the world has to offer you is better than what the Creator of everything offers you? Think about that. The world offers a limited number of people fame, fortune, success, recognition, popularity – and then they die, and that’s the end of that. But what God offers is for everyone – forgiveness, grace, hope -- and then they live… forever in a perfect eternity with Him.

For God loved the world in this way: He gave his one and only Son, so that everyone who believes [or puts their hope] in him will not perish but have eternal life. (John 3:16)

Why would we put our hope in anything else?

Perhaps one reason is because we are human and prone to wander. When I was asking God to reveal where I might have mistakenly placed my hope, He showed me that I had a big honking misplaced hope that was sucking the life out of me. I was shocked because I know better than to allow that to happen. But isn’t sin like that? We know better; but without thinking, we still get caught up in it.

Will you join me in releasing your misplaced source of hope and stand in line with me to await the blessings promised to those whose hope is in Christ?