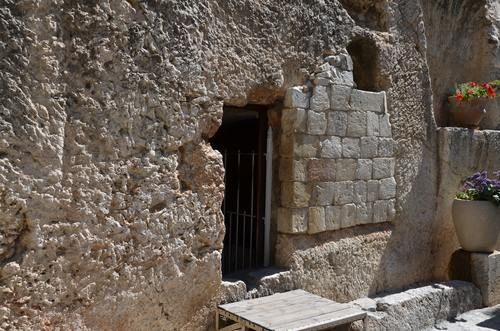 (This devotion is about our suggested Scripture memory verse for the month of April.)

In Luke 24, Mary and Martha were going to visit the tomb of Jesus to take care of His body. It was the first day of the week on their calendar, but it was the end of a very eventful week with a very disappointing outcome.

Just one week before, Jesus had fulfilled so many prophecies about coming to fulfill the law and become the Messiah. It wasn’t the way everyone had expected, but it was well received in Jerusalem - except by the leadership. And He had helped so many people! How could the leadership and the crowd and even one of His disciples turn against Him after all He had done for so many people! And it happened so quickly!

And the worst part is that it happened at Passover. Because of the Sabbath laws and the holiday, they didn’t even get to take care of Jesus. This is the first chance they had to come to the tomb to see Him and give Him the proper respect He deserved.

And another thing -- someone didn’t observe the Passover! By the time they got there, someone had taken Jesus’ body! So much confusion and anger! Who do we trust now? The Romans? The priests? Do we still have faith in Jesus? But how?

Fortunately, two angels appeared at that moment and knew exactly how they were feeling. Luke records in his gospel account how those angels addressed Mary and Martha:

While they were wondering about this, suddenly two men in clothes that gleamed like lightning stood beside them. In their fright the women bowed down with their faces to the ground, but the men said to them, “Why do you look for the living among the dead? He is not here; he has risen! Remember how he told you, while he was still with you in Galilee: ‘The Son of Man must be delivered over to the hands of sinners, be crucified and on the third day be raised again.’” (Luke 24:4-7)

Imagine the relief and joy that Mary and Martha must have felt - Jesus is alive! He is not here! He is risen! It completely changed their day! We must go find Him! And tell everyone else!

Jesus is risen and is here today! How is that truth impacting your day – and your life?

Jason serves at Immanuel with his wife and two kids. He is a software engineering manager.
SUBSCRIBE TO RECEIVE DAILY DEVOTIONS