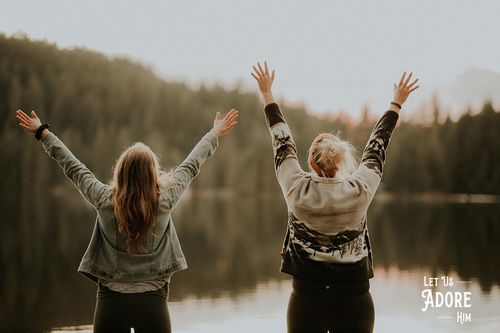 After she was welcomed and recognized as the mother of the Messiah by her relative (Elizabeth), young Mary burst into song! I was wondering, first of all, why such a sudden outpouring. Then I read that the journey from Mary’s home to Elizabeth and Zechariah’s home was a trip of 3-5 days. For her own safety, Mary would no doubt have joined a caravan heading that way. As she was traveling with the caravan, she would not have talked with anyone about what was really on her mind – so all she could do was ponder and reflect – and maybe chat about being betrothed to Joseph. All this time, she would have been quietly remembering Gabriel’s visit, his telling her she would be the mother of God’s Son, and reflecting on what she knew of God, His promises, and the scriptures. So, when she finally got to Elizabeth and realized that Elizabeth understood, young Mary unloaded this beautiful song that had been forming in her heart on the whole journey. Finally, she could release her song!

Her song in Luke 2:46-55 is called “The Magnificat” (Latin for “it magnifies”), because its words magnify God, her Savior. She begins her song: “My soul magnifies the Lord.” (Luke 2:46) Her words echo the song of Hannah in the Old Testament and are steeped in the words of the Psalms and the Prophets, words that would have been familiar to a young Jewish girl. (Luke 2:46-55)

She acknowledges what God has done for her by saying “He who is mighty has done great things for me, and holy is His name.” (Luke 2:49) And then she leaves herself out of the remainder of the song – focusing solely on the One she wants to magnify. She sings of His mercy, His strength, His putting down of the proud and the mighty, His exalting the lowly, His help to Israel.

It is stunning that these words come from the mouth of a 12 or 13-yr-old girl; but at this point, God is doing something amazing in Mary – preparing her to be the mother of His Son. He is filling her with His Spirit, equipping her, and even inspiring her in this song. Just as she stepped back from being the theme of her song -- letting her words glorify God alone -- she also stepped back from Jesus’ story – soon to become His mother, but staying in the background – because she knew that it was HIS story, not hers.

How does your life magnify the Lord? Even though your story might be a really good one, HIS story is the one that matters. Are you sharing that story?