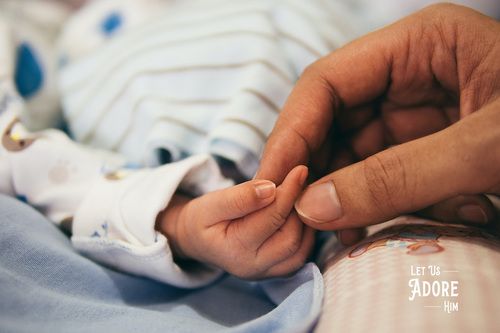 One afternoon I was in the hospital visiting a young member of my Sunday School class who had just had a baby. When I came into the room, she had her baby boy tenderly cradled in her arms. I stood by her bed looking at the precious little guy who was so at home with his mommy. As I started talking, his eyes opened wide. I didn’t think much of it until we noticed that every time I said something, his eyes would pop open. Then it dawned on her, “He KNOWS you! He’s heard your voice teaching our class for nine months! He KNOWS you!” I laughed and said, “Well, obviously I talked too much.” We both were so amazed that her teeny baby had such an awareness of a familiar sound – a sound he had heard in the womb!

I remembered that story as I read of Mary’s visit to her relative (Elizabeth), who was pregnant with the baby we know as John the Baptist.

Now Mary arose in those days and went into the hill country with haste, to a city of Judah, and entered the house of Zacharias and greeted Elizabeth. And it happened, when Elizabeth heard the greeting of Mary, that the babe leaped in her womb; and Elizabeth was filled with the Holy Spirit. Then she spoke out with a loud voice and said, “Blessed are you among women… For indeed, as soon as the voice of your greeting sounded in my ears, the babe leaped in my womb for joy.” (Luke 1:39-42,44)

As amazing and precious as my experience was with my friend’s baby, it was nothing compared to what happened with Elizabeth and Mary. What we read about in this passage is a communication from the womb! Earlier in describing John the Baptist, Luke wrote: “He will also be filled with the Holy Spirit, even from his mother’s womb.” (Luke 1:15)

Pregnant women are usually aware of the movement of the baby growing within – from the early butterfly flutters to stronger movement as months wear on. But what Elizabeth experienced and knew (because she too was filled with the Holy Spirit) was a silent prophecy of her son. When that baby heard Mary’s voice, he knew it was the voice of the mother of the
Messiah – and his joy was so full that he didn’t just move around, he leaped inside his mother’s womb! He knew!

Father, prepare our hearts for Christmas, that our joy may be full – because You know us – and because by the power of Your Holy Spirit, we can know You and we can recognize Your voice. Amen.