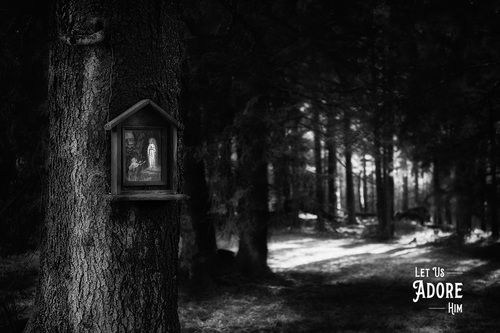 After Gabriel appeared to Mary, Luke continues his account of the story:

But when she saw him, she was troubled at his saying, and considered what manner of greeting this was. Then the angel said to her, “Do not be afraid, Mary, for you have found favor with God. And behold, you will conceive in your womb and bring forth a Son, and shall call His name Jesus. He will be great, and will be called the Son of the Highest.” (Luke 1:29-32)

This is a beautiful and almost poetic account of the angel telling Mary not to be afraid, she was going to be the mother of the Son of God, and His name would be Jesus. But what I would like for us to note today are two enormous understatements in this passage:

Understatement #1: “she was troubled at his saying.” Troubled hardly describes what must have zipped through the heart of this young (possibly even 12 or 13-yr-old) Jewish girl when Gabriel paid her a visit. It’s not as if the angel had been a frequent visitor to the village of Nazareth. One translation of the Bible recorded that “she was greatly troubled and disturbed and confused at what he said.” And this is even before he told her about God’s plan to bring His Son into the world through her. The vision of the angel Gabriel standing before her was enough to cause the blood to drain from her face and her knees to become weak – much more than a tad troubled.

Understatement #2: “He [Jesus] will be great.” Almost all the translations use the word “great” --- but a few use the words “eminent” or “supreme.” In our culture, the word great is defined as “considerably above average.” We have used the word so often that it has lost its power – those tacos were great, that was a great movie, or he’s the G.O.A.T. (greatest of all time – usually in some sport). But when we use the term “great” in regard to Jesus, we’re taking its meaning to the highest level – not just considerably above average – He is insurmountably, eminently supreme, greatest in all eternity! Much more than just great!

Two understatements. Something to think about: have you heard the Christmas story so often that you are no longer blown away by what occurred? Can you put yourself in Mary’s sandals and feel your head spinning and your knees weakening just imagining the holiness that she was encountering? Can you even fathom the incomparable greatness of Jesus – the Son of God who would be born to this young peasant girl? Don’t miss the awesomeness this Christmas!