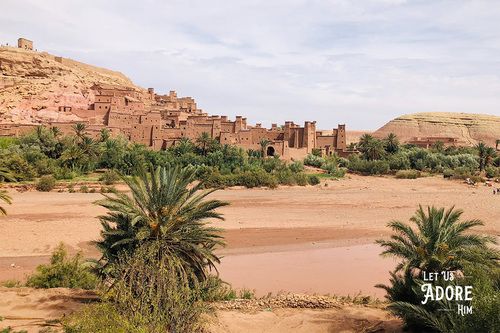 Now in the sixth month [of Elizabeth’s pregnancy] the angel Gabriel was sent by God to a city of Galilee named Nazareth, to a virgin betrothed to a man whose name was Joseph, of the house of David. (Luke 1:26-27)

In this passage, we meet Gabriel – the messenger angel. This is the third and final time he is mentioned by name in the scriptures. The first time was when he appeared to Daniel to explain the meaning of a vision. The second time was when he appeared to Elizabeth’s husband, Zechariah, to let him know that he and his wife would have a baby boy. And now here he is popping in on what was once a rather ordinary day in the life of a young girl named Mary.

Have you given any thought about the fact God chose Nazareth as the place to announce the coming of His Son? Think about it. Wouldn’t Jerusalem have been the expected place for Gabriel to pay a visit? Wouldn’t there have been plenty of young Jewish girls for God to choose from in a city the size of Jerusalem? But instead God chose the tiny village of Nazareth, with a population of a couple hundred people.

John MacArthur gives us some more information about this small village: “Nazareth was not on any of the major trade routes; all of the important roads bypassed it. It was well off the beaten path, far from the important centers of Jewish culture and religion. Moreover, Galilee, where Nazareth was located, was known as ‘Galilee of the Gentiles’ because of its proximity to Gentile regions. God’s choice of Nazareth… reveals that He [Jesus] is the Savior of the world, not of the powerful and elite of one nation only, but of all ‘those who are called, both Jews and Greeks.’ (1 Corinthians 1:24)“

Father, thank You for sending Your Son to be the Savior of the WORLD. (1 John 4:14)  As we celebrate Your Son’s birth, help us recognize and appreciate that all people are included in the hope of salvation and the hope of eternal life – from teeny villages like Nazareth once was to bustling cities like Jerusalem. Open our hearts and our mouths to share the good news that is Christmas – so that our world may know. Amen.