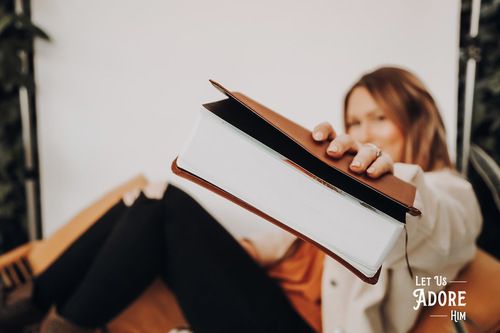 Now while he was serving as priest before God when his division was on duty, according to the custom of the priesthood, he was chosen by lot to enter the temple of the Lord and burn incense. And the whole multitude of the people were praying outside at the hour of incense. And there appeared to him an angel of the Lord standing on the right side of the altar of incense. And Zechariah was troubled when he saw him, and fear fell upon him. But the angel said to him, “Do not be afraid, Zechariah, for your prayer has been heard, and your wife Elizabeth will bear you a son, and you shall call his name John.” (Luke 1:8-13 ESV)

Offering the incense was not your average priestly duty.  Chapter 30 of Exodus tells us that the Altar of Incense was located in the Holy Place just next to the veil hung before the Holiest Place, which contained the Ark of the Covenant and the Mercy Seat. For the Israelite, the Tabernacle and then later the Temple represented the dwelling place of God. For the priest to offer the incense was to stand alone in the presence of God on behalf of His chosen people.

It was not mere chance that brought Zechariah to this moment; it was the providence of God. What the Apostle Paul would describe as “the fullness of time” (Galatians 4:4) had come, and the silence would be broken. As Zechariah is offering the Incense, the angel of the Lord appears and Zechariah reacts in fear, just as all of us would react. The first words spoken from Heaven in 400 years are these: “Do not be afraid.”

When you find yourself waiting for an answer to prayer, remember this: our timing and God’s timing don’t always align, but His timing is perfect.  Zechariah and Elizabeth prayed for a son, and God answered in a way that they likely never imagined. It just might be, that the answer to your prayer has a far greater purpose than you could ever imagine. Waiting is difficult, but in that waiting trust Him and watch what He will do.