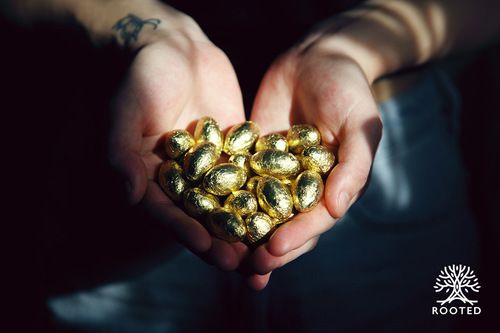 “The righteous will live by faithfulness,” Habakkuk writes, and one day “... the earth will be filled with the knowledge of the glory of the Lord.” (Habakkuk 2:4,14)

20 years ago I had a 3-year-old, and my life could be summed up with 3 things: Goldfish crackers, Sunny Delight juice, and Veggie Tales. One of my favorite Veggie Tale movies was Madame Blueberry. She was a fancy blueberry with curly hair and bright lipstick. She looked as if she had it all, but was sad. Madame Blueberry then was introduced to the Stuff-Mart -- a place full of stuff that would finally bring her joy and happiness… or so she thought. She filled up her house to the brim… but was still heavy hearted until she met a sweet little girl that, despite not having many things, was quite full of joy.

The Babylonians didn’t have a Stuff-Mart, but they did have homes filled with stolen goods and “things” they thought would bring them joy. God spoke through Habakkuk to warn the Babylonians that He was not pleased with their obsession with money and material possessions. Habakkuk came down hard on the people of Babylon for the way they built their wealth. Their desires were not upright. They obtained their wealth through greed, arrogance, extortion, and bloodshed.

It seems odd, cartoon fruits and vegetables singing about the perils of life. But these movies taught my son, and me, a lot of lessons.

Journal Prompt: List five things for which you are truly grateful – and leave a little bit of space between them. Under each thing write down what it is about that thing that makes it stand out. (And, dig deeper than anything that came from the Stuff-Mart.)