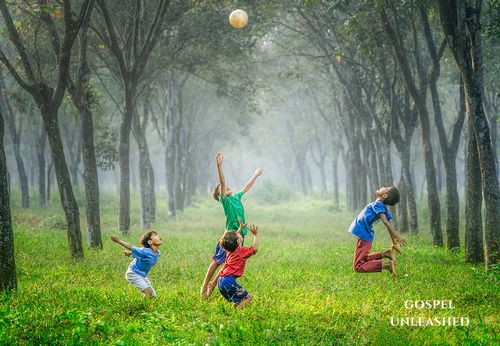 When putting this week of devotions together, I read the verses sharing the encounter between Jesus and Zacchaeus dozens of times. As with many of you, it read as a familiar story from Sunday school and VBS. I must give brief recognition to the (can I say famous?) notorious song, “Zacchaeus Was A Wee Little Man,” sung in childhood. However, it was not until one of my final read-throughs when God revealed something new, and I audibly chuckled at the transparency, which had been on the page all along.

Luke 19:8 tells us when Zacchaeus descended from the tree and the people grumbled, “He stood and said to the Lord, ‘Behold, Lord, the half of my goods I give to the poor. And if I have defrauded anyone of anything, I restore it fourfold.’”

I first read this verse and thought “Zacchaeus is generous and righting wrongs. Well done, sir!”  However, it was not until late in my study of this passage that I realized how beautifully Zacchaeus demonstrates the grace of the cross and the mission of Christ. Zacchaeus hurries down the tree with joy, for his soul is born again. While they were still grumbling, Zacchaeus returns fourfold of what he had taken from the people of Jericho. He is not conditional in extending grace. He did not wait to start his new life in the morning and let the crimes of his past go unanswered. He not only gave back to the people who forgave him or celebrated his salvation, he chose to give in abundance, evidence that God’s grace is radical and prompts radical change. His behavior echoes but a shadow of the relationship Christ holds with each of us: He died for us while we were still sinning and knowing we would do so until our last breath (Romans 5:8).

Salvation does not transform our reality into a life of ease and perfection. However, it does shift our view of experiences on earth. Like Zacchaeus, we should begin to look beyond our own desires and expectations of righteousness. Our behavior likely stands out as odd when expected reactions are countered with the unexpected. Our hard-to-please boss receives a “Yes ma’am!” and a joyful effort rather than mumbling complaints as we start a new project. The slow car in the left lane receives a friendly smile as we pass on by rather than the fleeting satisfaction of our horn. Grace is more than a character trait—it takes hold as the very power behind our actions and motivations.

Ebony and Ivory
Is Your Faith Enough?
Do You See Them?
Finally!
A Powerful Force