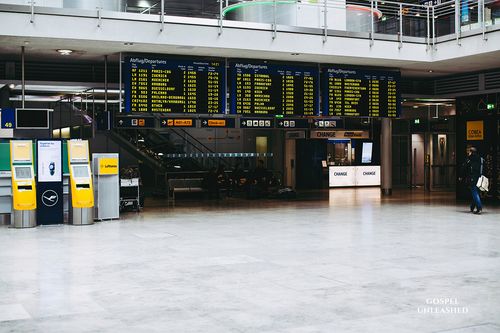 On a recent business trip, I almost missed my flight by three minutes, right before the gates closed. In my haste to catch the flight, I inadvertently dropped my driver’s license in the terminal, just at the gate floor. I did not realize this until I arrived at my destination, when I frantically looked for it to no avail. A few hours later, thankfully, I received a phone call from the airline that my license had been found and would be securely stored in an office, where I could retrieve it upon my return. That was good news, to say the least. However, I later found out I would have to undergo extra screening at the return airport without my government photo ID. That was fine with me.

On the day of my return, I had to present an alternate form of ID with my name on it. Then I had to wait to be ushered through security. As I was walking toward the checkpoint, I could hear some security officers saying, “He’s a red bin.” Later I understood what that meant – I was given two red bins for my bags and items, obviously different than the usual gray bins. After the security scan, I was taken aside for the extra screening of checking every corner of my bags, shoes, laptop, etc. In all honesty, it was kind of fun because I knew the reason behind this scrutiny. I felt quite special and obviously separate from the other travelers because of one lost plastic card.

This memorable airport experience I have just shared with you reminded me of how, as believers in Christ, we have been called to be different, set apart for God’s glory. 1 Peter 2:9 reminds us of this truth: “But you are a chosen people, a royal priesthood, a holy nation, God’s special possession, that you may declare the praises of him who called you out of darkness into his wonderful light.”

Friend, may I remind you that Jesus lived a counter-culture life while He was on earth. He was different and did not let the culture of His day determine the quality of His life. He lived a purpose-driven life, laser-focused on the cross, without any distractions. Jesus prayed for His disciples saying, “… for they are not of the world any more than I am of the world.” (John 17:14)

Even as we endure these crazy times, know that you are not of this world, but a citizen of Heaven. You are only in this world living for an audience of One – God! My prayer is that you will live differently in these times, and reflect Jesus as you do so.

George, and his wife, Christiana are proud parents of five-year-old Annajoy and one-year-old Elijah. Immanuel has been home for them since 2006, where they serve in the iKidz Ministry and are members of the Connect group.
SUBSCRIBE TO RECEIVE DAILY DEVOTIONS