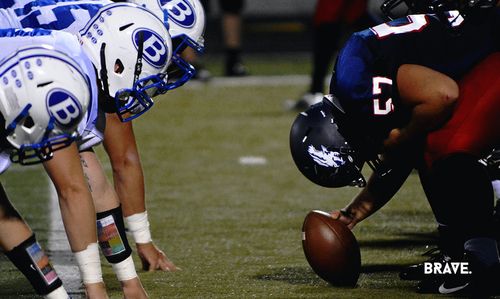 Football is the sport of choice in our family. We’ve spent many evenings at football practice, scrimmages, and games over the last decade. One of the most often repeated instructions I’ve heard coaches give to players is “finish the play,” or “play to the whistle.” The setting of Esther chapter 8 brings the familiar instruction to mind.

Esther had already acted bravely in identifying herself as a Jew and identifying Haman as the mastermind of the plot to destroy her people. Haman is now dead, hung on the very gallows that he had prepared for Mordecai, but the evil he had devised against the Jews is not dead.

“Then Esther spoke again to the king. She fell at his feet and wept and pleaded with him to avert the evil plan of Haman the Agagite and the plot that he had devised against the Jews. When the king held out the golden scepter to Esther, Esther rose and stood before the king. And she said, ‘If it please the king, and if I have found favor in his sight, and if the thing seems right before the king, and I am pleasing in his eyes, let an order be written to revoke the letters devised by Haman the Agagite, the son of Hammedatha, which he wrote to destroy the Jews who are in all the provinces of the king. For how can I bear to see the calamity that is coming to my people? Or how can I bear to see the destruction of my kindred?’” (Esther 8:3-6 ESV)

Esther and Mordecai are safe in the palace, not directly threatened by Haman’s evil plot. Yet, Esther bravely approaches the king without his invitation to plead for her people -- an act that could have serious consequences, even death. Why would she take such a risk?  The Jews were still in danger; the whistle hadn’t been blown on Haman’s evil plot, and Esther was going to do whatever she could to save her people.

There are some good takeaways, important reminders for us in this story. First, the conflict is with evil, not with individuals.

“For we do not wrestle against flesh and blood, but against the rulers, against the authorities, against the cosmic powers over this present darkness, against the spiritual forces of evil in the heavenly places.” (Ephesians 6:12 ESV)

Second, the call to be brave is not about a series of isolated moments in our walk with the Lord. The challenge is to a consistent pattern of courageous living; trusting Him, following His lead, allowing Him to use our circumstances for His glory.