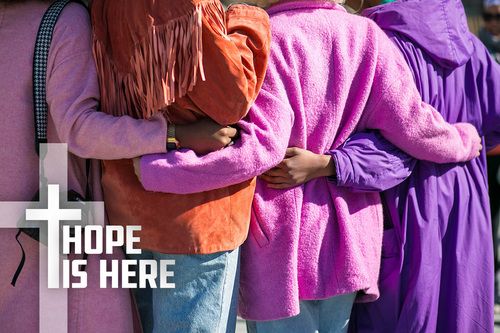 In the beginning, God created the Heavens (God’s space) and the Earth (our space). In the first few chapters of the Scriptures, we learn that God’s space and human’s space overlap in a place called Eden. This quickly turns, as the first humans, Adam and Eve, want to seize wisdom for themselves and to not trust God’s wisdom. They are cast to live outside of the garden...and it’s dangerous outside the garden. Humanity continues their trek using their own wisdom to determine what is good and bad.

God chooses one family and establishes a relationship with them, and they become the people of Israel. They build, according to some very detailed instructions, a tabernacle (a very special tent structure) and eventually a temple in Jerusalem. These work as mini-Edens where God and humanity can meet! Great! God and humanity are finally reunited! But Israel continued with the same pattern as the rest of humanity and ended up messing up their new mini-Eden.

When Jesus comes on the scene, He proclaims that He is bringing the two back together again and that He is going to be The King of this new Kingdom. He says that in His Kingdom His people would be His temple, or the place where Heaven and Earth meet. If you skip to the end of your Bible, you will see how this ultimately plays out: in a new garden city, a New Jerusalem.

This is the grand story of the Bible, about how God’s space and our space reunite. Currently though we live in the in-between part of this story. So what does this mean for us?

Paul, in the book of Ephesians, put it this way: “So, then, you are no longer foreigners and strangers, but fellow citizens with the saints, and members of God’s household, built on the foundation of the apostles and prophets, with Christ Jesus himself as the cornerstone. In him the whole building, being put together, grows into a holy temple in the Lord. In him you are also being built together for God’s dwelling in the Spirit.” (Ephesians 2:19-22)

Collectively all Christians make up the temple of God. God, through His Spirit, is what is holding the temple together. So let's pray together that others will see the unity of God’s space and our space. A space of faith, hope, and love; but, most of all, love.