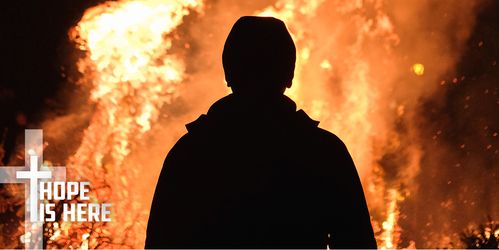 You’re probably expecting to hear “the rest of the story” about Paul and Silas’ imprisonment – how God blew everybody’s sensibilities as He shook the foundations of the jail with a violent earthquake, opened the cell doors, loosened the chains of the prisoners, brought the jailer to his knees in repentance, and opened the door to salvation for his whole family – and probably quite a few of those prisoners too! Please do read about this amazing act of God in Acts 16:25-31. It is mind-blowing!

But what I want us to consider today is that as Paul and Silas were praying and singing in that jail cell, they had no clue what their “rest of the story” would be. They had no idea that they would be dramatically rescued. In fact because of the hostility toward them, it was evident that the authorities wanted to silence them and make them give up and retreat  – and, if they didn’t cooperate, put them to death.

Their situation reminded me of the O.T. account of Shadrach, Meshach, and Abednego – three men who refused to bow down and worship the gold statue of Nebuchadnezzar. When they were brought before the angry king, he told them they would be tossed into a furnace of blazing fire if they wouldn’t bow down; and he arrogantly asked them, “Who is the god who can rescue you from my power?” (Daniel 3:15)

Their reply was this: “Nebuchadnezzar, we don’t need to give you an answer to this question. If the God we serve exists, then he can rescue us from the furnace of blazing fire, and He can rescue us from the power of you, the king. But even if he does not rescue us, we want you as king to know that we will not serve your gods or worship the gold statue you set up.” (Daniel 3:16:18)

The shared faith of these three men and of Paul and Silas was a faith in a God who is able to do anything – they firmly believed that. But they also knew that even if He didn’t rescue them from their “hopeless” earthly situations, they still would not be silenced or bow down to anyone but their Creator.

When we face challenging situations and the rest of our story is uncertain, is our hope in our God who is able? The experiences of these men of faith remind us where we need to place our hope. Hope was there in the fiery furnace, hope was there in the prison cell, and hope is here in us if we place our hope in the heart and the promises of our God.

Ebony and Ivory
Is Your Faith Enough?
Do You See Them?
Finally!
A Powerful Force