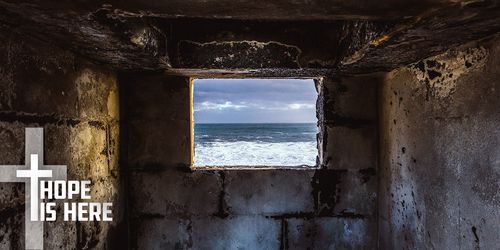 After Paul and Silas arrived in Philippi, things took a swift downturn. They were both arrested after Paul commanded a demon to come out of a slave girl who had been taunting them over a period of many days saying, “These men are the servants of the Most High God, who proclaim to us the way of salvation.” (Acts 16:17)  If you just read those words, they sound like the slave girl is proclaiming Christ – but Paul recognized that her words came not from a heart tender toward Christ and could even be detrimental to the cause of Christ since the townspeople had seen her around the city making money off her fortune-telling.

Because the slave girl no longer had the powers that the demon had made available in her, her masters lost their profit-making opportunity. So they had Paul and Silas arrested, beaten mercilessly with rods, thrown into the innermost parts of the prison, and had their feet placed in stocks.

So … where’s the “Hope Is Here” in this story? Sounds pretty hopeless – two preachers of the Gospel sitting in a dark cell, hurting beyond belief, still bleeding from their scourging, and unable to move around or get comfortable because their feet were in stocks.

Somehow in the depths of that prison, God was moving mightily and filling those two followers of Christ with the hope that is found only in Him. They may even have remembered that their Savior had been scourged and beaten too – and eventually crucified – and somehow found a deep joy in knowing that they were counted worthy to suffer as He did.

Because of the hope that was in them, Scripture tells us this: “But at midnight Paul and Silas were praying and singing hymns to God, and the prisoners were listening to them …” (Acts 16:25)

For a moment, let’s think about what they might have been praying. Although we might imagine they were just crying for help, I believe their prayers were more important than even that … prayers of gratitude that they were allowed to suffer for Christ’s sake, prayers of forgiveness toward those who had abused them, prayers of hope that God would be glorified even in their distressing situation. And as they prayed – and as often happens when we pray – they were comforted by God’s presence and His promise to be with them always.

That’s what God’s hope does. Let’s welcome His peace which is beyond our understanding and let that peace “protect [our] hearts and minds through Christ Jesus.” (Philippians 4:7)