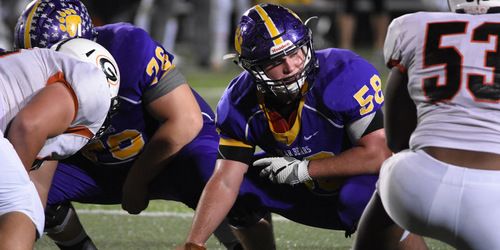 “I am able to do all things through Him who strengthens me.” (Philippians 4:13 HCSB)

Does this verse literally mean “all things?” If I decide to become a Christian music singer or a pro golfer tomorrow, does this verse mean I should go ahead and quit my day job? If you’ve heard me sing or seen my swing, you’d advise against it. My layman’s interpretation of this verse is that we can do all things Christ wants us to do, if we rely on His strength instead of ours.

Sometimes I think of Christ standing faithfully behind me, cheering me on as I try to do things while relying on His strength. I don’t think this is quite right, and once again I need a sports analogy to explain my opinion.

Have you seen this happen during a football game? It’s third down, and the team with the ball needs to gain at least two yards or they will have to punt the ball to the other team. The quarterback tosses the ball to the running back, who finds himself staring at only one defender in his way. The running back sees that if he can get by that one defender, he may be able to run all the way down the field for a touchdown. So what does he do? He hesitates in place for just a moment, trying to lure the defender into leaning in one direction, so he can run past him on the other side. It is high drama, and a touchdown hangs in the balance.

But then suddenly another giant defender comes running in and bowls over the running back who never saw him coming. Fourth down. Punt to the other team.

When the running back gets to the sideline, the coach is usually jumping up and down and pointing in the direction his team was trying to go. His message to the running back is clear. “We only needed two yards. Your linemen blocked that play perfectly to get you two yards. If you had just run straight into that guy and fallen down you would have made two yards. But you tried to get fancy and score a touchdown, and we got nothing. Next time take the yards they give you!” Often the coach jettisons a headset or clipboard during this conversation.

I think we Christians can learn something from this example. Every interaction we have with non-believers is a chance to “advance the ball” for Christ. And He’s not idly sitting in the stands cheering us on or yelling at us from the sideline. He’s in the game blocking for us, leading the way.

Let’s not hesitate. If He’s giving us the opportunity to gain two yards, let’s be content with the two yards. But we can’t hesitate. We have to run.

As we help others understand the hope that heals, we can rest assured that our hope is found not in what we can do for Him, but what He is able to do through us!