Christ Is All I Want and Need 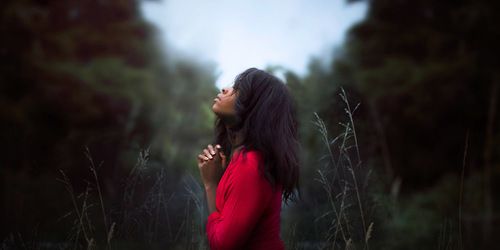 Are you ever troubled that you don’t measure up to God’s standard of righteousness? God tells us to be holy as He is holy. But when we honestly measure ourselves against God’s perfect standards, we know we fall short. Even our own consciences testify time and time again that we regularly violate our own moral standards. Although we often try to justify our behavior, we instinctively know that God would be justified to pour out His wrath on us for our sin against Him.

Martin Luther, the father of the Protestant Reformation, is a prime example of someone who was so well versed on the law that he agonized over his inability to keep it, no matter how hard he tried. He would spend hours each day confessing his known sins to the priest only to leave the confessional remembering something he had overlooked. He could get no relief from his guilt; and he admitted that not only did he not love God, but sometimes he even hated Him.

When Luther discovered that his justification had nothing to do with his own merit, but had everything to do with the righteousness of God freely given to him by faith alone, he was converted and was finally able to experience true freedom. Out of a newfound love for Christ, he became deeply devoted to Him. His keeping of the law became something he hungered to do out of love—not something he begrudgingly tried to keep for fear of God’s reprisal.

Apart from abiding in Christ, the natural man is unable to do anything that God would consider as good, because the love of God is not in him to do so. Even when he seems to be doing something good, it’s really only a virtuous vice. His hypocrisy is the tribute that vice pays to virtue.

Paul recognized that trusting in anything other than Jesus Christ is not only futile—it’s damning. This is why Paul counted everything he prized most about himself as nothing but garbage.

If God would ever ask you why He should allow you in his heaven, how would you respond? If you ever think you could deserve His grace, you would automatically fail the test. The only proper response is that you trust that Christ has done it all for you. God receives all the glory!