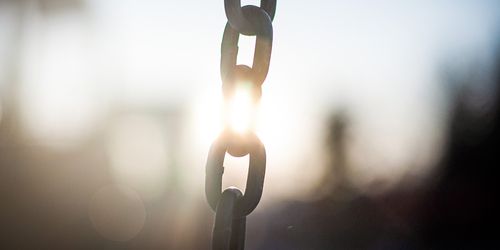 I would venture to say that very few of you have ever asked God for the opportunity to experience suffering (“Sign me up for some suffering, God! My life is too good!”) – or asked God to please extend your suffering a little bit longer. In our prayers, most of us ask God to take away the pain, the suffering, or that thorn in the flesh.

However, sometime down the road, as we reflect on the suffering we have experienced, we often find that there was something special even in that time of suffering --- lessons learned, love and care experienced, priorities rearranged, opportunities to explain the reason for your peace.

The writer of Philippians is right there with you. In fact, at the time the apostle Paul is writing this letter he is a prisoner. He was under house arrest in Rome – meaning that he was at home, but had to stay put. I thought that didn’t sound too horrible . . . until I read that he had an iron cuff on one arm chained to a Roman soldier all day and all night! Everything he did, he did with someone chained to his wrist! Even when he was writing this letter to the people at Philippi, he was dragging another hand along with his own! Yet he doesn’t seem to see it as a problem – he sees that he has a captive audience to hear the gospel!

The guards worked in shifts; and after a certain number of hours, the chains were loosened for a moment to get Paul connected with the next soldier. So throughout the day and night, Paul had a variety of guards with whom he did life. They would not only hear his words and be pulled along as he wrote; they would also observe his actions and his faith in the One called Jesus Christ.

Many of Paul’s friends were praying for him and were worried about him, so he comforted them with these words:

“But I want you to know, brethren, that the things which happened to me have actually turned out for the furtherance of the gospel, so that it has become evident to the whole palace guard, and to all the rest, that my chains are in Christ” (Philippians 1:12-13).

What a testimony! And what an optimistic outlook! What looked like a terrible situation (being under house arrest) became a major opportunity for joy (the whole palace guard seeing the gospel lived out)! As we do life as believers, every circumstance we encounter can become an opportunity to live out what we believe. Let’s follow Paul’s example. And when circumstances arise (and they will), let’s be optimistic, hopeful, and faithful.