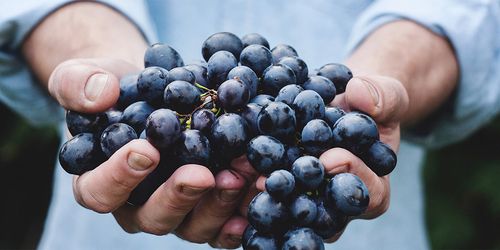 Today is Tuesday of Holy Week. On the same day that Judas was concocting his plan to betray his Rabbi, Jesus was still teaching – in the temple, where the Pharisees were questioning His authority – and on the Mount of Olives, where He spoke privately with His disciples. Just as we would like to know when our current troubles might end, so the disciples also had some questions – particularly about the last days. Jesus explained that no one knows the day or hour, but we are to be ready at all times. Let’s pray that what we do “in the meantime” – as we wait for our pandemic to end – as we await the return of Jesus – will be of eternal significance and bring glory to our heavenly Father.

This week we are discussing how Jesus is the True Vine.

My run that Saturday morning was routine until I approached a high school. A crowd of teenagers was out front yelling about something. I was on the opposite side of the street, and it took a moment to figure out the kids were yelling at passing cars to stop for a fundraiser (garage sale, car wash, etc.). They were waving signs around and having a good time.

They yelled across the street to invite me to the fundraiser. I kept running but turned and put my arms out and shrugged helplessly, attempting to convey the message “I’m in running shorts and have no money; so even if I wanted to, I can’t help.” I’m not the most expressive person, but I felt like my message was simultaneously friendly and clear.

One of the young men, an outgoing sort, was undeterred. Poster board in hand, he crossed the street and ran after me, yelling about the fundraiser the whole time. He was not being intimidating; he was just yelling, running, and waving his poster. Just as he caught up to me, I turned, still running, and said something like, “Sorry there, Bud, but I’ve got no money.”  His response baffled me. He said, “Oh, that’s fine. I’m just doing this for the Vine.” And with that he stopped running and went away. It made no sense.

What I figured out (several months later) was that he was referring to a short-lived social media service called “Vine,” which was quickly swallowed up by Twitter. It allowed users to post short videos, like what you see today on Twitter, Facebook or Instagram. By this young man’s calculation, it would be hilarious for his buddies to post videos (“Vines”) of him desperately pursuing a random jogger while waving a fundraising poster.

I was reminded of this encounter when contemplating Jesus referring to Himself as “The Vine.”

“I am the vine; you are the branches. The one who remains in Me and I in him produces much fruit, because you can do nothing without Me” (John 15:5 HCSB).

This verse gives that high school kid’s words a completely different meaning to me now. “I’m just doing this for The Vine.”  It got me to thinking.

When I serve, what is my motivation? I have served out of guilt. I have served because I didn’t want to be the one guy in a group who didn’t sign up for something, which is really serving for the attention or perceived approval of others. I have served because I was asked directly by a high-profile church staff person and didn’t want to say no to them, which is a form of celebrity worship. Don’t get me wrong. The service opportunities were a blessing to those being served, and I am always personally blessed when I serve. But how often do I do it for the right reason?

What am I doing only for The Vine?