Up from the Grave 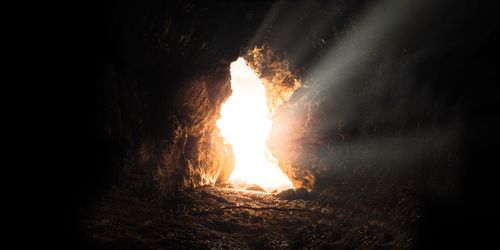 “Afterward, Joseph of Arimathea, who was a disciple of Jesus (but secretly for fear of the Jews), asked Pilate to let him remove the body of Jesus. Pilate gave him permission, so he came and removed His body. Nicodemus, who had previously come to Jesus at night, also brought a mixture of myrrh and aloes, about seventy-five pounds. So they took the body of Jesus and wrapped it in linen cloths with the spices, according to the Jewish burial custom. Now there was a garden in the place where Jesus was crucified, and in the garden a new tomb in which no one had yet been laid. And because it was the Jewish day of Preparation and the tomb was nearby, they laid Jesus there” (John 19:38-42).

How dark and lonely it must have been in the hours after they laid Him in the borrowed tomb. The week had begun in triumph and ended in fear for what would come next. Jesus had been crucified.

They had been with Him when He taught the multitudes, seen Him restore sight to the blind and make the lame to walk. They were eyewitnesses when He raised Jairus' daughter and the widow's son; they had heard His claim to be the resurrection and the life. They were there when He cried and prayed at the tomb of His friend, heard Him command the stone to be rolled away, listened when He called Lazarus from the grave, and watched Lazarus walk from the tomb after four days. But now Jesus lay in the tomb.

His body had been taken from the cross and hurriedly laid in the tomb. At the behest of the Jewish leaders, the Romans had sealed the stone that covered the entrance to the tomb. But then … “then came the morning that sealed the promise.” The women found the stone rolled away and the tomb empty (John 20). Jesus had taken up life again just as He had taught them.

The Resurrection changes everything. He gives beauty for ashes, light in the darkness, and life for death.

By Jesse Smith
Posted in Hope